The big problem with draft horses roaming free in the pastures is that they get very dirty in winter. and of course they hate being closed up. Living on hills don’t make it any easier. So we keep them in a smaller camp, both for their own sake and for the fields’ sake. But with the many rains and the muddy slopes and everything just awfully dirty and wet, it stays a challenge to give them some excercise and keep them clean! and groomed.

Today we washed them a little bit and mon chéri had eager little hands to help. Afterwards, with  a cup of warm “chocolat chaud” and contentment with their good work written all over their dirty faces, they looked muddier than the horses, which meant THEY then  needed a wash!

Whether we love it or hate it, it needs to be done. Laundry. Washing. Some of us are lucky enough to just fill the laundry basket and someone else does the washing. And the ironing. Some of us do it all ourselves. I am one of those. Partly by choice and partly by force.

Laundry isn’t one of my favorite chores..but isn’t that why they are called chores? Anyway, a chore needs doing and in our house, it comes down to me. Whenever I think back on the washing days in my Maman’s house, I remember them as fun days.  But I have come far enough in life to know that memories are tainted. Maybe Maman also did the washing simply because she had no choice either. There is little bit of a romance to doing washing in summer. Who doesn’t reach for the camera when driving through the country side and seeing washing on long lines drying in the breeze. Or laundry hanging over fences. Or even on chairs or poles. Where there is a ray of sunlight, there you’ll find washing.

*Join me now for a  typical summer’s washing day here at Coin Perdu.

I love the smell of fresh, natural non perfumed soaps. The Marseilles soaps are wonderful, as is the “Pierre des Landes”, an artisanal soap which works for just about everything. To soak my mother’s old doilies and all white cloths which has stains, I grate some savon de Marseille into a bowl of water, leave the pieces to soak and rise. Or I spread thickly soaped pieces out in the sun to remove the stains. It is the perfect way to remove stains without using any chemical stuff, since the sun is a natural whitener. when it has dried, I rinse the pieces in clean water and spread out to dry.

Beware..not just any soap marked Savon de Marseille is the real thing! Le véritable Savon de Marseille needs to consist of a  minimum of  72% pure olive oil and 28% sodium carbonate.  Many other savons de marseille also have other oils as well as some animal fats added.

We all know that feeling of getting into bed at night, sliding your body inbetween crisp linen sheets, smelling of sun and  wild herbs. Exactly the reason why I don’t iron my sheets in summer. I might iron the foldback at the top which has a monogram or lace. And the way to do it? Turn the sheet wrong side up and place a double folded towel under the monogram. Place a damp cotton fabric on the top of the monogram and iron so that the right side of the monogram sinks into the towel, seeing to a nice embossed monogram. It also prevents the iron from damaging the yarn/thread in the long run. Fold your linens ans store in a cupboard or shelf along with some cedar balls and some dried lavender if you wish. I also place pieces of soap in the corners of all our closets/armoires/ cupboards…you know, those last pieces of the soap we don’t use. I don’t like perfumed sachets.

I don’t have a laundry room..yet…and it will be quite a while before I do have ma petite buanderie. In the image below is the barn which will be converted into a laundry room. I am already dreaming of that day…a huge farm table on which I can do my folding… a deep porcelain sink for washing and rinsing and soaking… an old armoire(cupboard) for equipment and products…a window to let in light and a large sill to set out crumbs for the birds and always have an enamel jug with flowers…drying lines across the ceiling, working with pulleys, like the olden days(for winter time), large old baskets, enamel bowls and jugs for soaking, poaring…some old bric and brac for ambiance, just because it is pretty…oh..to dream… 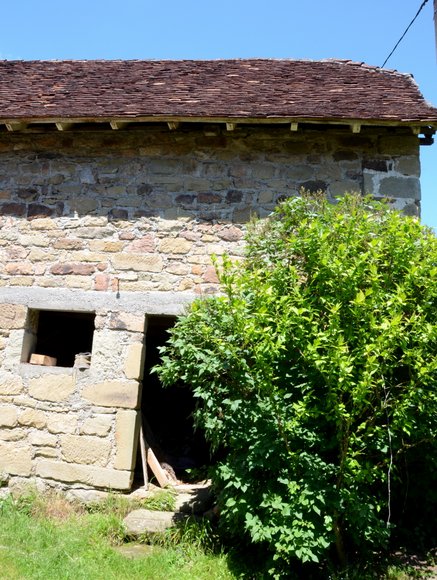 Well..come to think of it…it might be that I actually enjoy doing washing. In summer. For I am doing it exactly the way Maman did! My washing needs to be neatly hung. All the socks together, pinned on the toe. The T-shirts hangs over the line at the chest and are pinned under the sleeves..no stretching from hanging from the pins. The shirts opened up and pinned at the side seams at the bottom. Dresses are hung on hangers, lingerie are pinned on the top at the sideseams. Everything has to be grouped together and hung straight..I hate loops and droops. Dish towels and pillow cases..straight, no drooping! That is how my Maman did it.

Whenever I have a stain on a sheet or tablecloth,  I rub the stain with savon de Marseille(or whichever natural soap you use) and hang it over two lines so the sun gets to bleach out the stain..see no need for stain removers! It works, really  it does. Of course, if you use coloured linens and clothing, you have to fall back on the stain remover, for the sun will bleach spots on your fabric. Dark fabrics are hung in the shade to prevent fading. They don’t need sun, only a bit of heat..and fresh air! 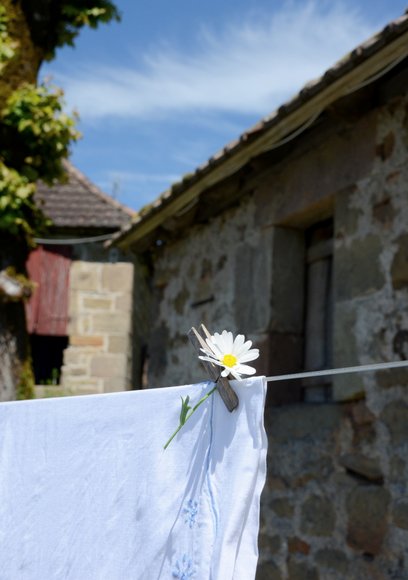 In winter, when I don’t have the beautiful blue skies as in the image below, I have my linens washed and ironed at the blanchisserie, where they are washed and ironed on large rollers.. some day I hope to visit our blanchisserie with my camera and do a post on how they treat the old linens..it is so interesting. After all, they have been doing it for centuries; taking care of the different textile; linen, or cotton or mixtures, hemp, flax.. They also take good care of the monograms and lace and hand embroideries that go along with antique linens and tablecloths, serviettes. But that is all for next winter..I am now basking in summer linens! 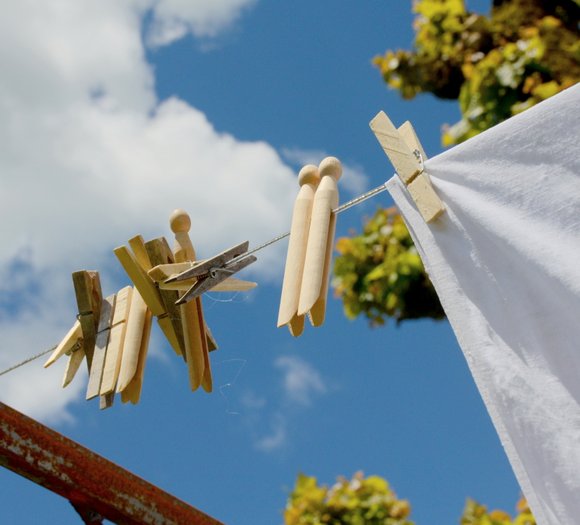 Now tell me you don’t have the desire to go hang out some washing? 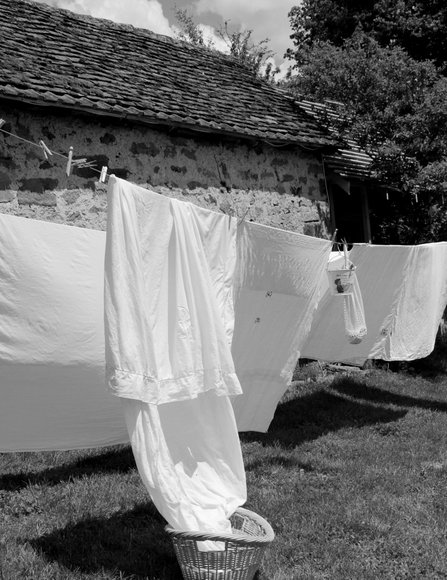 Spring is supposed to have arrived, but on some days? I wonder if I made a mistake with the seasons..maybe we are moving into winter? Noo..n..it is spring, surely. In spite of icy weather, we have lilacs blooming profusely, wisterias drooping low with heavy blooms, tulips swaying their hips and young ones grazing in the fields..like our adorable poulette who arrived this weekend.

On Friday night we saw that Gubi was getting restless, walking up and down, snorting, and we knew the hour would not be far. At 3:00 on Saturday morning it started. She lay herself down in the écurie and those first two feet appeared. It was cold out, raining, wet and we piled on the hay so Gubi’s new poulain could enter the world soft and warm. 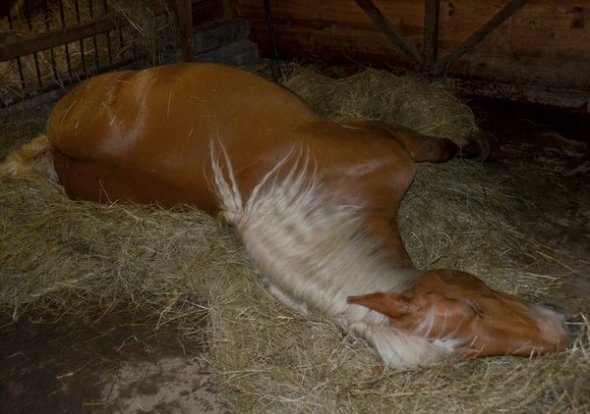 After an hour of hard work, the process was over and Gubi could take a break, while the poulain found its strength, its breath and while we could also take a breather! 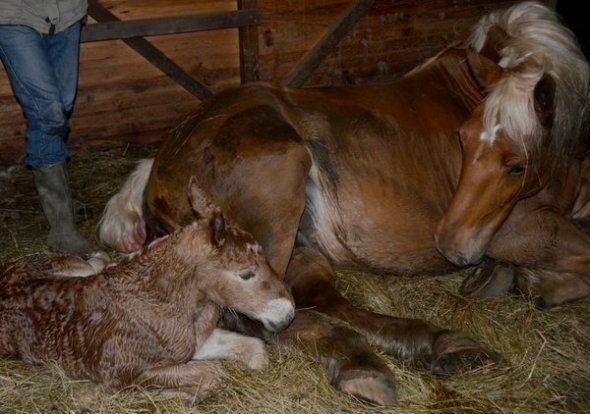 Of course the first thing we searched for…a girl or a boy..and yippeeee..a little poulette…a little girl! We called her Duméla, which is “hello” in Sotho, one of south Africa’s 11 official languages.

As tired as she was, on shaky legs, Gubi raised and took on her role as mother. From that moment on, we hear the sound we haven’t heard before..a gentle, soft  throat whinny, which is of course her mothering voice.

Duméla just went from strength to strength and she is already taking a run on those cute long legs. 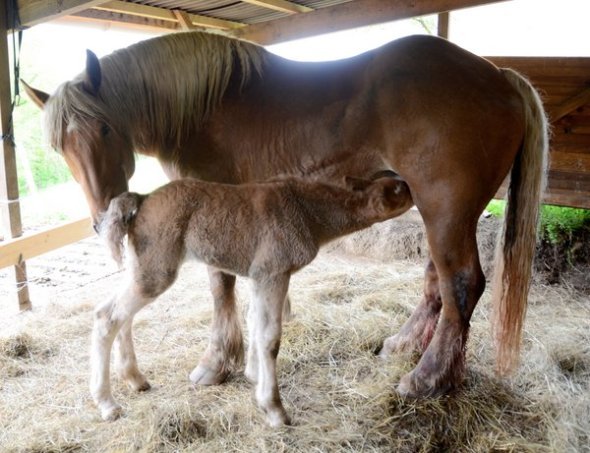 Mon chéri is of course blooming too! He is surrounded by girls here on Coin Perdu, but does he complain..non..how can he, when he he has only excitement and challenges and happiness around him! 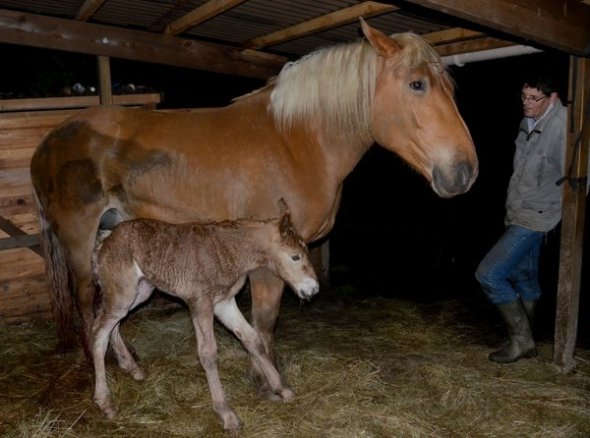 Duméla is today 2 days and a few hours old and cute as a button! 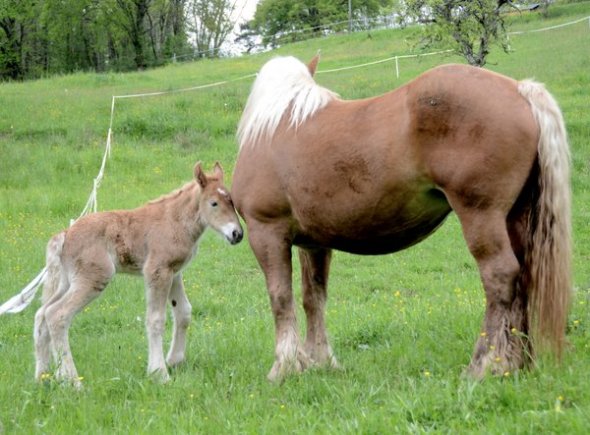 A garden in the making

I love a garden. I love gardening, no question about that. But starting a new garden from scratch…on raw farmland, on slopes, on rocksolid ground makes me re ask the question…do I really…I mean reaallly love gardening. To my own detriment…sigh…unfortunately, yes I do. I do love a garden and I do love gardening. With all its backaches and dirt and broken nails and sunburnt skin. I’m so crazy, I love even that too! and while I complain with utter self pity at night about my aching back and aching elbow, I think of the smell of fresh earth, of the fragrance of fennel and lavenders, the beauty of white Iceberg roses against the dark soil, the chickens digging just as hard as me to reach the abundance of earth worms in the fertile soil. I think of the infusion of camomile tea directly from the garden, the succulent veggies from our potager…and I complain even harder but wit a wide smile, because tomorrow I’ll be out there again, seeking again the sun, the soil, the fragrances and this pain for all the indescribable pleasure it gives me.

..stairs lading to future water feature with potager at the left and garden to the right – 2012.. 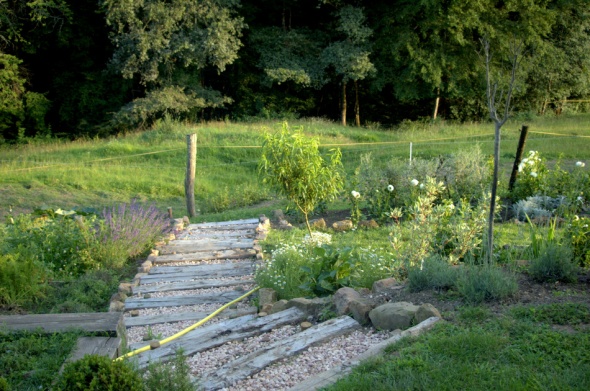 The garden is far from finished and it will change completely again next season. But this is what happens to a garden, at least to mine..all of my gardens I first have to live in it for a while, before I really know what it asks for. 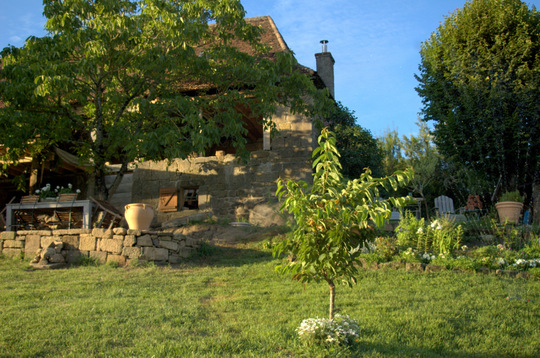 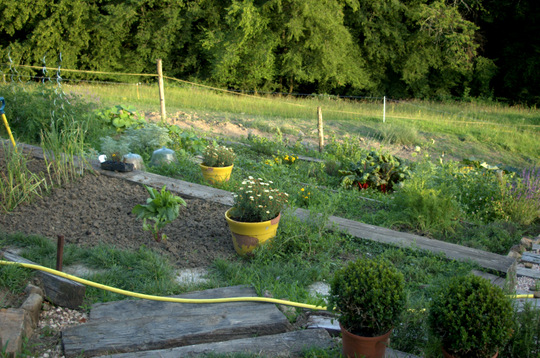 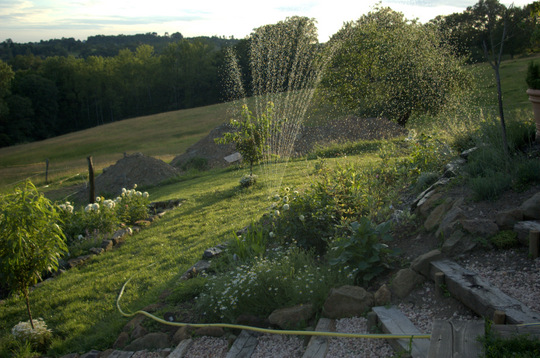 ..star dahlia among the echinops..

..white marguerites around the cherry tree..

..the work horse for mowing the lawns  on our difficult terrain..

..the work horse for making new beds on farm land..

It will probably..no, not probably, definitely still take some time before we can move into our home and before we will be done with mud and stones and dust, but in the meantime, I can at least pick a rose or two for the house and get my daily dose of exercise by daily digging up the magnitude of weeds that takes over the garden the minute I turn my back. I suppose it is just a normal part of this garden in the making at Coin Perdu. 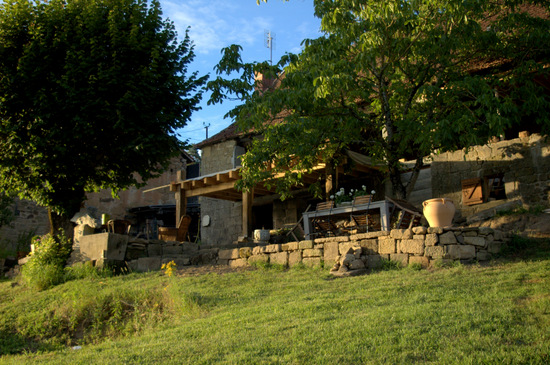 Subscribe to Coin perdu, a mountain home by Email

Writing on the windowsill

Life in the barn Chickens on the road

Its a small town life